This rare safe was built around the year 1790 in Northern Italy. More than 200 years ago this strongbox was very impressive, and today, more than two centuries later; it is still very decorative and very impressive, especially with its metallic adornments. This was a clear symbol of high status for the wealthy owner.

LSC found the safe actually in Pedemonte in the Province of Linguria, which is in the triangle of Torino, Genova and Nice, not too far from the French border. However, because of the appearance of the safe, and especially the beautiful women’s face in the centre it can be assumed that the safe was rather manufactured in the in the centre of Northern Italy or in North of Tuscany. The characteristic hair-balls the head on the safe shows can be so today still found in Impruneta, Tuscany were the famous women’s heads of antique terracotta figures have the same characteristic hair-balls. Masterpieces are also the original keys and the complex trick mechanism. 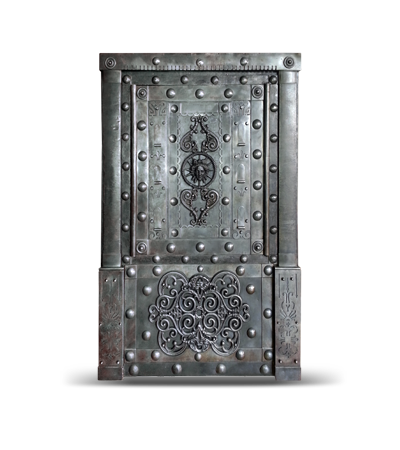